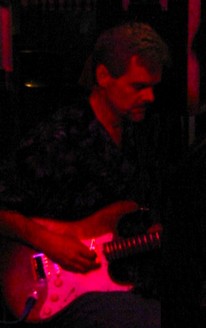 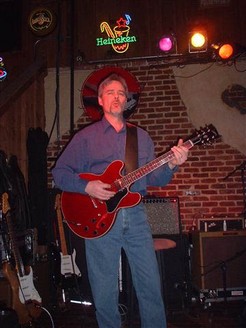 I've been playing guitar since 1971. I was still in swaddling clothes then... My mother gave me a guitar for my birthday - I'm not going to say which birthday - and I've been trying to learn how to play 'em ever since. In 1975 people started paying me to play. What a concept!

Trusty is my 1964 Fender Stratocaster. If I had to choose a single guitar above all others, this would be the one. I bought it from Tony Hunt in 1980, and it was literally a basket case - just a neck and body and some hardware in a box. A former owner had painted it an awful chartreuse color. I stripped the body and rubbed it down with Tung oil; installed Schaller tuners and Seymour Duncan pickups; re-wired the electronics, etc. Recently I've installed graphite saddles and a set of Lindy Fralin's handmade 5% over-wound pickups. It's a sweet guitar and, no, it's not for sale! It's a dead ringer for Bonnie Raitt's Strat, but I bet I've had mine about as long as she's had hers...

Rusty is a 1988 Gibson ES-335 I found on e-Bay. It's a reissue of the classic dot-neck model, and it plays like butter. Stratocasters are more versatile, but there's nothing as fat and sweet as a 335.

For slide I use Lee's early-80's black Fender Stratocaster, set up with a really high action and tuned to open A. This tuning is a little unusual. Lowell George of Little Feat fame used it.

My brother-in-law, Tim Quertermous, is an expert luthier. I play one of his Q-Guitars, which I'm very proud to own.

Lee has a well-equipped shop - I call it the 'K & L Tubeworks' - and we enjoy getting together and working on vacuum tube equipment. We service and build the stuff, and try not to shock ourselves to death. It keeps us off the streets and out of trouble. Lee plays a 1959 Fender Bassman reproduction that we built from scratch. For me we've built a hot-rod blackface Fender Super Reverb replica. It's loaded with Weber VST P10Q AlNiCo speakers, custom-made power and output transformers, and a layout of my own design. Most of the time I use a 1976 Fender Deluxe Reverb, also purchased on e-Bay. I've 'blackfaced' it electronically and cosmetically and loaded it with a Weber P12N speaker.

Recently we've built an amp for Kent - it's a dual 6V6GT circuit based on the old Fender 5E9 Tremolux, modified to have a single channel, and built in an old stereo chassis. He calls it his Little Green Monster.