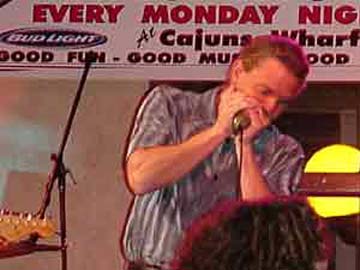 Kent is a multi-talented performer whose credits include a three year stint with the wildly popular local band The Blues Patrol, highlighted by an album "The Blues Patrol recorded live at the White Water Tavern", and an appearance at Antone's for the South by Southwest music showcase in 1991. He has also appeared with Shannon Boshears and a host of others. Kent joined Blues DeVille in 1995, bringing his barrelhouse, Chicago blues harmonica style into full focus, igniting the band with incendiary solos and spirited performances.